2013.08.17 Montreal Impact v DC United, Stade Saputo, Montreal, Que, Canada
Impact defeat the United 2-1 on 2 goals from Marco Di Vaio, one of which was nominated as goal of the week. The DC goal was scored by Conor Doyle to tie the game in the 81st minute before a sellout crowd of 20, 801... 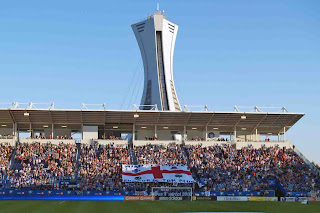 Impact Fans below the Olympic Tower 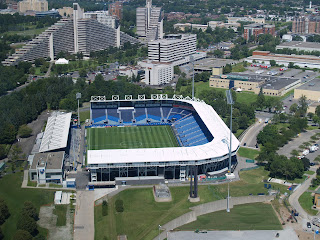 Stade Saputo as seen from the Olympic Tower 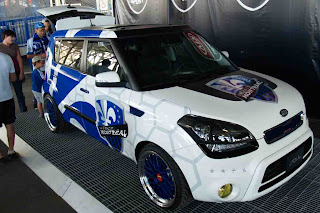 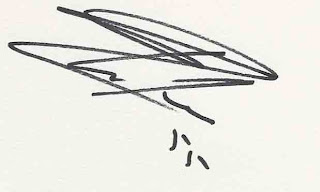 Wandrille Levfevre - played in one game with the Impact, previously played for the Montreal Impact in the NASL.

Autograph book - As we left the stadium, there were two non-dressed players signing autographs outside the main entrance. The line had been closed after a set number of people, but we were told by the staff that often the players will continue to sign for anyone waiting. After the remaining fans received their autographs, Levfevre came over and continue to sign. The other player signed 2 more additional autographs and left. Staff were handing out the above autograph book, which measures 4 x 6 and features 2 players per page, with a brief bio and room for a signature. 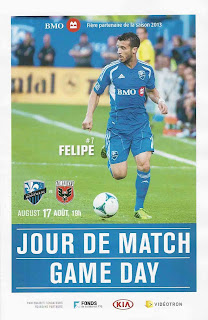 Game Day lineup card with Felipe on the cover, a single fold 8.5 x 11 sheet.
A great experience, fan activities before the game and a very friendly staff. 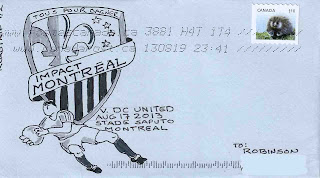 I created this commemorative cover before I went to Montreal, dropped 2 similar envelopes in the mail, but then found out Canada Post does not work on Saturday. This cover received an Aug 19 postmark. In any case I am sending this out to Marco Di Vaio in hopes of obtaining an autograph. With any luck I will repost with good results.
Updated 2013.08.27

Posted by RRobinson at 5:20 PM