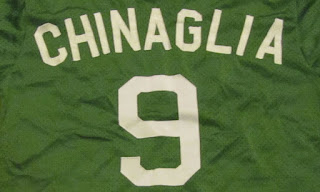 Chinaglia was born in Carrara, Tuscany, Italy. His family moved to Cardiff, Wales in 1955. By 1962 his football skills earned him an apprenticeship with Swansea Town in the Football League Third Division, making his senior debut in 1964. Chinaglia would stay with Swansea until moving to Massese, in 1966, in the Italian Serie C. From 1967-1969 Chinaglia would play for Internapoli, Serie C.
Chinaglia would move to Lazio, Serie B, in 1969 staying with them until 1976. He would score 98 goals in 209 appearances for Lazio.

Chingalia's play with Lazio earned him a spot on the Italian National Team, 1972-1974. In 1973 Chinaglia helped Italy to its first win over England at Wembley Stadium, in a friendly. Chingalia would play for Italy in the 1974 FIFA World Cup, West Germany. When he was substituted for in a match against Haiti, his actions caused his teammates to ostracize him, effectively ending his National Team career at 14 caps, 4 goals.

1976 Chinaglia would move to the United States and the NASL Cosmos, until 1983, playing in 254 games, scoring 242 goals (including regular  season and playoff games).

Chinaglia was inducted into the US National Soccer Hall of Fame, 2000. 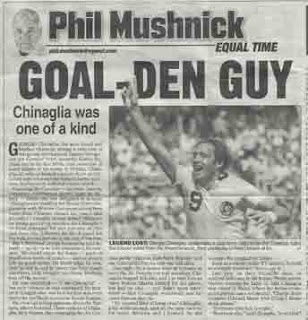 Phil Mushnick, NY Post April 2, 2012
In his article Mushnick talks about how Chinaglia "told the truth...as far as he was concerned, his version. He knew what he was, how he did it and never ran from the tough questions, only straight into them."

In a comment about the Sirius Radio Show "The Football Show" Chinaglia hosted with Charlie Stillitano, Mushnick remarked how Chinaglia scolded Stillitano "Charlie, don't compare Lionel Messi with Diego Maradonna, please."
"Everyone else has, Giorgio"
Everyone else is an idiot" replied Chinaglia

Posted by RRobinson at 7:26 PM