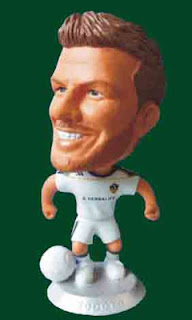 Recently notice that the local soccer shop was carrying these KoDoTo mini figures, featuring the likes of Wayne Rooney, Stephen Gerrard, Messi, Buffon, Iniesta, Balotelli, van Persie, Ronaldo, Giggs, Lampard, Kaka, Fabregas, Xavi, Robben, Tevez, Ribery, Bale and others. Players come in club or national team uniforms. The figures are about 2.5 inches with the head almost half the size of the overall figure.

There are 2 David Beckham figures that I have located on-line, both the only figures to wear the MLS LA Galaxy uniform. The first, which feautres Beckham smiling,  in an all white Galaxy shirt.  The second features a more serious Beckham in a white with blue striped Galaxy jersey.

Shenzhen Kodoto Toy Co. is a manufacturer from China, specializing in design and production of popular sports figures ( I have seen basketball players and a special Steve Jobs figure). 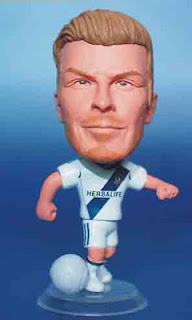 Posted by RRobinson at 2:28 PM