The Red Bull opening day for the 2013 season brought the sparse crowd little excitement amid the snowy afternoon. Although Red Bull had more opportunities outshooting DC 24-4, including 2 crossbars, both from Fabian Espindola, neither team could get the goal that would give them the win. Bill Hamid was in goal for DC and Luis Robles was in goal for the Red Bull.

The game started with the traditional game ball being delivered by the Red Bull Air Force parachuting onto the field. Although by now this felt old when it was announced, there is still a thrill of seeing these parachutists landing on the pitch, while watching from the helmet cams as they descend.

As the game started the snow started as well. A light but constant snow that did not effect the play. The game however proceeded to degrade as the players continued to play the body even after the first yellow card was issued against the Red Bulls in the 25th minute. Red Bulls would collect 3 yellow cards to none for DC.

We talked about the inconsistency of the Red Bulls organization and their inability to build a cohesive team. I pointed to the fact that the 2013 team only has Henry, Dax McCarty and Roy Miller who have been with the organization since 2011. Red Bull always seems to be cleaning house, but they have yet to build the foundation. 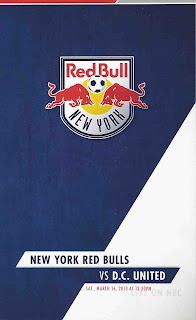 The Red Bulls no longer provide a game program, instead they offered a scorecard (9x5.5 inches) that has a very plain design. The inside features the roster of both teams, providing number, position, games played and goals/assists, and Red Bull Facts like this is Mike Petke's first home game as head coach. 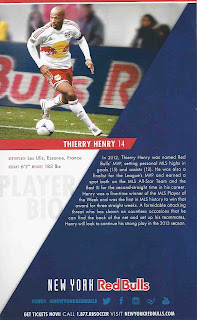 The back of the program did offer a nice profile and photo of Thierry Henry. Should anyone get the chance to meet him and obtain an autograph this is a nice item to have signed.

The 2013 game schedule again offers a limited (boring design) and is posted with other Red Bull schedules. Even the ticket stubs design offers little in the way of style...
Posted by RRobinson at 5:02 PM