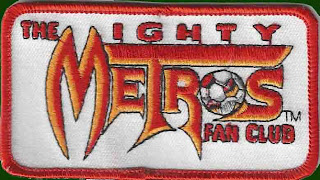 Back when my boys were younger they were members of the Mighty Metros fan club. This was a great promotional tool for the clubs to bring kids to the stadium. Members could earn points by attending games and earning jerseys, soccer balls, training sessions, autograph sessions, player trading cards or stickers. The Metrostars were not the only club to have a kids based club.

Currently a review of the MLS clubs show that the Chicago Fire offers a free kids club for fans 14 and under.

The Philadelphia Union offers a Junior Supporters Club at three prices ranging from $35 to $130.

Old man rant: I personally think it is a shame that the MLS clubs forget the kids, the foundation of their future fans. Their web-sites seem to focus on their academy teams (which will accommodate a very small percentage of kids going to see a game), their supporters (adult fan clubs that offer great support for the teams) and their training camps... I understand that these are businesses out to make money, but I always wonder why they only focus on the big dollar and not the little guys who will be their future fan base...
Posted by RRobinson at 7:54 AM