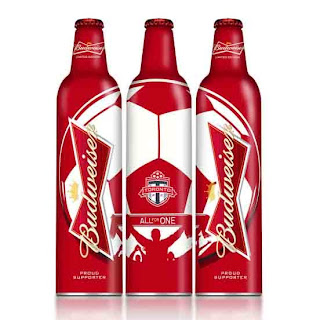 TORONTO, Feb. 21, 2013  - To kick off the 2013 Major League Soccer season, Toronto FC and Labatt Breweries of Canada have announced a new, exciting partnership under the Budweiser brand, the official beer partner of Toronto FC and BMO Field. The partnership, among other things, gives Budweiser - along with Bud Light, Stella Artois, Alexander Keith's and Michelob Ultra - the pouring rights at BMO Field.
To help celebrate this new partnership, Budweiser will launch a commemorative Toronto FC-branded Budweiser aluminum bottle at LCBO locations in the GTA beginning February 25. 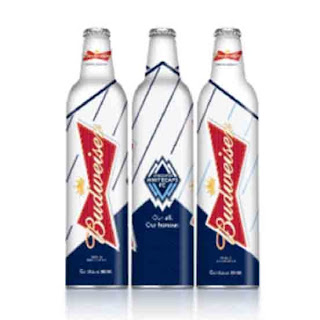 A special edition, commemorative Budweiser bottle in collaboration with Vancouver Whitecaps FC will be available this summer. This limited edition aluminum bottle is specifically designed with influences from Whitecaps FC’s 2013 kit and will appeal to every passionate ’Caps fan. It incorporates Whitecaps FC’s color scheme, mountain peaks from the logo, stripes from the kit, and the ‘Caps slogan, “Our all. Our honour.”
The official launch party for the limited edition Budweiser Whitecaps FC bottle will be at the away match viewing party this Saturday, June 29 at The Pint Pub

Posted by RRobinson at 5:46 AM