NYCFC played their 3rd game of their inaugural season, and their second home game to sell-out crowd of 27,545. The weather was cold and snowing, which left a few empty seats as some fans stayed home to watch the game. Although Yankee Stadium is a beautiful facility, I am not in favor of watching a soccer game on a baseball field.

I love the headlines of  the New York Post "Shorthanded NYCFC suffers first loss in Franchise History"..it's only the game game, did they expect the team to go without a loss?!  short-handed meant David Villa did not play.

Kansas City went up early in the game when Ike Opara headed in a throw-in from Matt Besler. The narrow dimensions of the field created a corner-kick environment for the throw-in, which KC took full advantage. NYCFC could not score and had few good efforts. The play of the team was lack-luster giving away many passes. One fan in our section took to shouting "Attack, Attack, Kill, Kill!!!" in hopes of motivating the team, but we were too far away to be heard...

Although the game was uninspired, the fans were clearly behind their team throughout the game. One of the slogans NYCFC uses is "our city, our club" while mentioning the five New York boroughs. A clear jab at the New York pretender Red Bulls who market themselves as a New York team, but play their games in New Jersey... 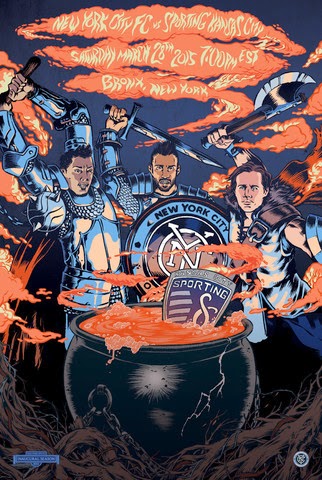 To commemorate the home games NYCFC has produced posters for each of their first two games. For the KC game the above poster from artist Conor Nolan, which features NYFC players as knights anticipating their opponent spewing from "the cauldron". These were available for purchase in the gift shop for $10.00 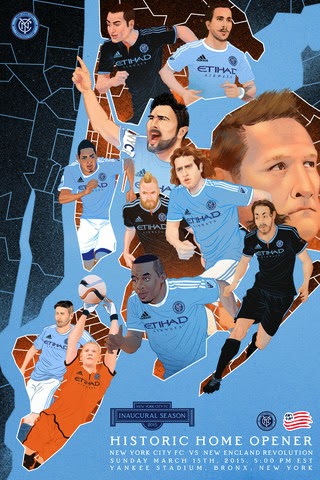 The poster for the inaugural home game by NYC artist Michael Marsicano utilizes the five boroughs of the city. The game day posters can also be seen along with some great soccer/football art at Football Artist Network
Posted by RRobinson at 5:25 AM