2001 the MetroStars as part of their promotions, issued a set of player cards, which could be obtained in 2 ways. The first was the packet of cards were issued to tickets holders as part of a large ticket purchase. (Our first packs came when the Soccer Club went to a game). the second was to join the kids fan club and present your fan club membership card at the fan club table located within the main entrance of Giants Stadium on game days.


The cards came wrapped in a foil wrapper, were read: MetroStars 2001 Team Trading Cards...Inside: five of your favorite MetroStars players...Collect the entire 2001 MetroStars Team set for Free. Stop by the MetroStars Fan Center on the main concourse at Giants Stadium and sign-up for the Mighty-Metros Fan Club. It's FREE! The Mighty Metros Fan Club provides a series of Free benefits including the opportunity to collect the entire set of 2001 trading cards.

The back of the wrapper repeats the same message with the additional information: Attend the September 15th game vs. New england to participate in a major trading card event in the bubble where you'll be able to swap cards with other MetroStars fans! (the bubble was the practice bubble located next to the stadium)


The cards featured a full sized color photo of the player and their jersey number on the front. The cards are numbered on the back with 23 cads in the entire set.
Cards 1-3: Pedro Alvarez, Mark Chung, Alex Comas... 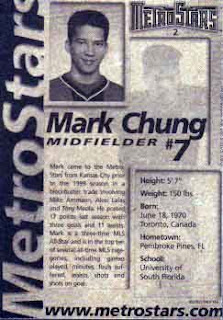 The cards were printed on gray stock similar to the Topps baseball cards from the 1960s, and featured player information and a small portrait photo.
Posted by RRobinson at 6:24 PM