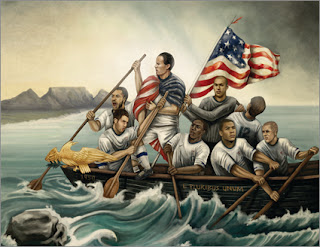 Team USA
The South African illustration house Am I Collective was commissioned to create 32 murals for ESPN's 2010 World Cup campaign, under the direction of NY ad agency Wieden and Kennedy. Each mural celebrates each of the 32 teams competing in the 2010 FIFA World Cup. The mural for Team USA replicated Washington Crossing the Deleware