I found it interesting that Lionel Messi made the headlines of Time Magazine. The article written by Bobby Ghosh titled "Lionel Messi's Final Goal - The planet's best soccer player is hailed wherever he goes - except in his native Argentina. What must he do to win over his countrymen?"

Excellent article on why the Argentine fans do not think of Messi as an Argentine star, but more as a Spanish star, considering his achievements with Barca as compared to his non-acheivements with the Argentine national team. Plus the fact that Messi has never played in the Argentine Primera Division, signing with Barca in 1991 at age 14, therefore never building up a hometown fan base...

It is nice to see a US magazine featuring an article on a football star not from the US. 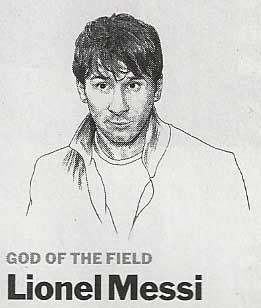 May 2, 2011
Selected as one of Time Magazine's 100 most influential people

Soccer's Little sorcerer makes Magic with his feet
"The thing we forget about Barcelona's Lionel Messi is that for all he's accomplished - he's a 2-time winner of the Ballon d'Or, soccer's top individual prize - he's still a kid, just 23. He's a little guy and looks as if he could never hurt you. but give him the ball and you're in trouble.

It's not normal, what he does. I know the expectation that builds up around top players, but it doesn't bother Messi. He's a competitor: he doesn't want to lose, not even in training. He reminds me of Diego Maradonna, the way he dribbles past people, the way you can kick him and he'll just bounce up and carry on running with the ball, then score a goal - it's ridiculous. I played with him for three years, and it was just a joy."
-Thierry Henry, New York Red Bulls, formerly with Arsenal and FC Barcelona.

Posted by RRobinson at 5:41 PM