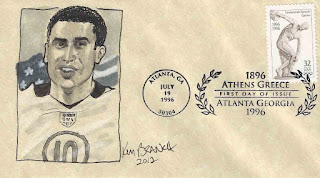 I attended a comic book show today and had one of the artists, Ken Branch, whose specialty is sports portraits and superheroes, to draw a picture of Claudio Reyna on a 1996 Olympic first day cover.  The 1996 Summer Olympics were held in Atlanta, Ga, USA, with the US Women's team taking the gold over China, while the men's competition saw Nigeria taking the gold medal over Argentina. The US men's team would finish third in group competition and not advance to the quarter finals. 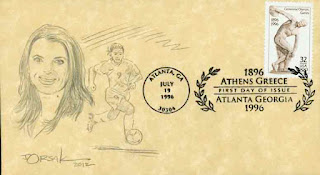 Drawn by artist Joe Orsak, this cover features Mia Hamm, who played for the US Women's National team from 1987-2004. Hamm participated for the US in three Olympic tournaments: Atlanta 1996 (Gold), Sydney 2000 (Silver) and Athens 2004 (Gold). 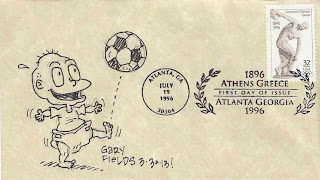 Tommy from the Rugrat comic - drawn by comic strip artist Gary Fields 2013.03.30 Asbury Park Comic Con, Asbury Park, NJ.  I decided to have some fun with this by having Tommy play soccer on the cover, inspired by the Olympic soccer matches..
posted 2013.03.30
Posted by RRobinson at 8:24 PM