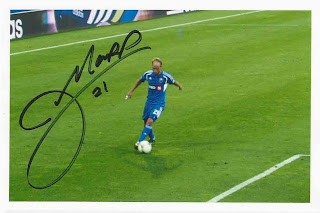 
Mailed out this photo I took of Justin Mapp in Montreal (Aug 17)  and just received it back today. Not the best photo, but one of the better photos I was able to take that night. Mapp kindly signed it and returned it through the post.
Posted by RRobinson at 7:42 PM