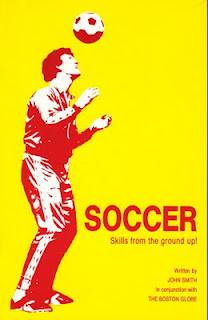 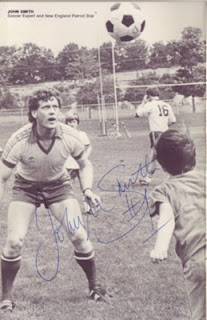 John Smith is an English-born placekicker for the New England Patriots (1974-1983).

Smith was offered a professional soccer contract in England at the age of 16, but turned it down to focus on his education. Following his graduation from Southhampton University, he came to the United States to teach and coach soccer. He was introduced to American football and was asked to attend a free-agent try-out with the Patriots.

Smith would earn a spot on the Patriots roster...and would become part of one of the most controversial plays in football. During a game againt the Miami Dolphins in 1982 in a snowstorm at Foxboro Stadium, a field worker was using a snowplow to clean the yard markers on the field for the officials. With the score tied 0-0 with 4:45 remaining, Patriots coach Ron Meyer ordered the snowplow operator to clear a spot on the field for placekicker John Smith, supposedly for a more accurate measurement of the kick. As the plow crossed the field the operator veered left, directly in front of the goal post giving Smith a clear spot from which to kick. The field goal was good and the Patriots would win 3-0, as Miami coach Don Shula protested... 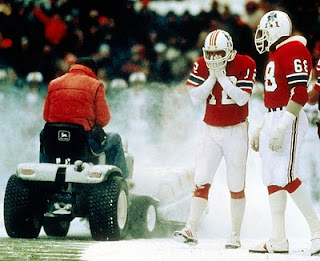 In 1976 Smith, with the help of the Boston Globe newspaper started his soccer camps, which are still in existence. The top image shows the front cover and inside front cover from Smith's "Soccer skills from the ground up" booklet issued by the Boston Globe... Smith operates the John Smith Soccer Academy in Milford, Ma.
Posted by RRobinson at 6:26 AM