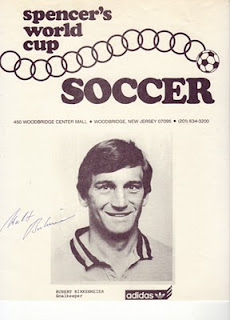 Hubert Birkenmeier - began his career in West Germany, in 1970, when he signed with Freiburger FC before moving to Tennis Borussia Berlin in 1972. He remained in Berlin until 1977 when the New York Cosmos of the North American Soccer League purchased his contract. Birkenmeier remained with the Cosmos until 1985, playing eight outdoor NASL, two indoor NASL and one Major Indoor Soccer League season.

Birkenmeier was a 1982 and 1984 First Team NASL All Star. In August 1985, he signed with the Chicago Sting of the MISL, as a backup for Victor Nogueira. The Sting waived him on April 29, 1986. On November 4, 1986, Birkenmeier signed with the expansion New York Express of the MISL. When the Express folded two-thirds of the way through the season, the Los Angeles Lazers signed him to a ten day contract. In 1988, he played for the New York Pancyprian-Freedoms of the Cosmopolitan Soccer League as it went to the semifinals of the U.S. Open Cup. He signed with the New York Eagles of the American Soccer League, and remained with them through the 1990 season in the American Professional Soccer League.

Posted by RRobinson at 3:19 PM