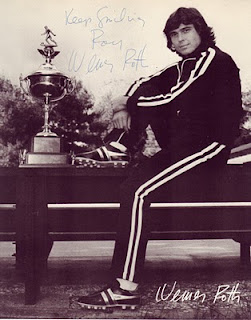 Werner Roth played for the New York Cosmos, he also represented the United States men's national soccer team for three years. He is a member of the National Soccer Hall of Fame.Born in Yugoslavia, Roth immigrated to the United States at age eight.

One of the few Americans on a star-studded New York Cosmos side (i.e. Pelé, Franz Beckenbauer), Roth played with the club seven years, and helped it to the Soccer Bowl title in 1977.

He was inducted into the National Soccer Hall of Fame in 1989.

Posted by RRobinson at 8:36 PM