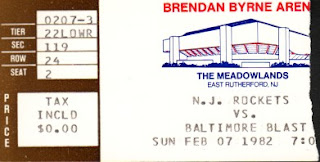 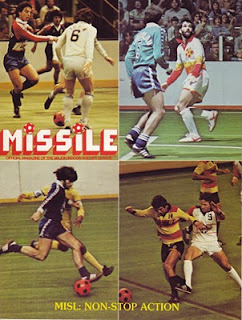 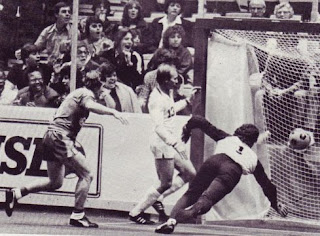 The Rockets first goal ever - The rockets Brian Alderson (8) watches intently as his shot heads toward the net past the NY Arrows Gene Strenicer (13) and goalkeeper Shep Messing in the first game ever played by the Rockets in the MISL.
The New Jersey Rockets were an indoor soccer team that played their home games in the Brendan Byrne Arena, Meadowlands, East Rutherford, New Jersey during in the Major Soccer League for the 1981-82 season.

Playing in the Eastern Division of the MISL during the 1981-82 season the NJ Rockets finished in 5th place with a record of 17-27, behind the NY Arrows, Pittsburgh Spirits, Baltimore Blast and Buffalo Stallions, and ahead of the Cleveland Forces and the Philadelphia Fever. New Jersey suspended operations at the end of the season.

From the article "What's In a name?" ...we liked the nickname Comets, but our new partners, Kansas City, had already selected that. Most important, we wanted something relatively short, something modern, something that connoted action. When all was said and done, we picked the name Rockets.....
Posted by RRobinson at 6:22 PM