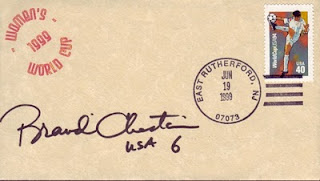 On July 10, 1999 at the Women's World Cup at the Rose Bowl, Pasadena..Chastain scored the fifth kick in the penalty shootout to give the US the win over China in the final game...after both teams failed to score during regulation play.
Posted by RRobinson at 10:31 AM