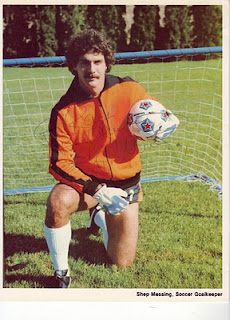 Shep Messing soccer goalkeeper and broadcaster, graduated from Harvard University in 1973 after playing on the school's men's soccer team. He was a two-time second team All-American.

He joined the U.S. national team that played in the 1971 Pan American Games in Cali. He went on to play with the U.S. team at 1972 Summer Olympics in Munich. The U.S. went 0-2-1 in group play and failed to qualify for the second round. Messing manned the net in the U.S.'s third game of the games, a 7-0 loss to West Germany. After the Olympics, Messing received offers from teams in Mexico and Germany, but was invited to play for the New York Cosmos of the North American Soccer League, alongside Pelé, Franz Beckenbauer and Giorgio Chinaglia. He made his debut with the Cosmos in a May 20, 1974 exhibition game with Irish club Finn Harps. He would remain a backup for most of his career with the Cosmos.

When the Major Indoor Soccer League began its first season in 1978-1979, the New York Arrows were essentially the Rochester Lancers in different uniforms. As such, Messing became the starting Arrows goalkeeper through the team's six years of existence. Messing became the league's dominant keeper, being named to the MISL All Star team in 1979, 1980 and 1981. He was the championship MVP in 1979. When the New York Arrows fired coach Don Popovic in February 1983, the team named Messing, who was sidelined with an injury, as the interim coach.

Messing wrote an autiobiography entitled The Education of an American Soccer Player which was published in hardcover in 1978 by Dodd, Mead, and in paperback in 1979 by Bantam Books.