Besides the Olympic envelope issued in 1979, the first soccer related issue for the United States, 4 additional stamps honoring Olympic Soccer have been issued...1983 for the 1984 Los Angeles Olympics, 1992 Barcelona Olympics and 1996 Atlanta Olympics. The 1992 issued had the following printed in the selvage along side the stamp - The XXV Olympic Summer Games will be held in Barcelona, Spain, July 25-August 9, 1992..The popularity of soccer in the US has grown tremendously in recent years, and the improved quality of play has enabled US teams to become more competitive than ever before in the world soccer arena. 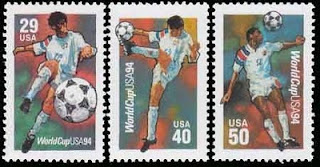 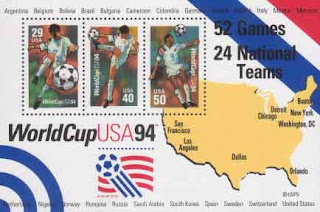 In 1994 the US issued 3 stamps to honor the World Cup, which was being held in the US for the first time. Along with the 3 individual stamps a souvenir sheet with all 3 stamps was issued.

Posted by RRobinson at 8:39 AM