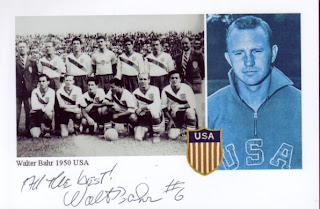 Walter Bahr 1948-1957 US National team, team captain, member of the 1950 US National team that played in the 1950 World Cup competition. Bahr played for the Philadelphia National of the American Soccer League, as an amateur. Competed in the 1948 Olympics.
In the 1950 World Cup, the US National team defeated England 1-0 in one of the greatest upset in sports. June 29, 1950, Brazil...The Americans had lost their last 7 international matches before facing the English squad. In the first half, against a strong English team the US scored in the 37th minute..Bahr took a long shot, as English keeper Bert Williams went to his right to make a play on the bal. Joe Gaetjens dove headlong and grazed the ball enough to to place it to the left of the diving keeper for the score.
With the momentum of the goal the Americans kept up their game matching the superior english squad. The game would end in a stunning US victory.
Bahr had three sons, Casey, Chris and Matt who all played professionally in the North American Soccer League, were members of the US Olympic team and played in the National Football League 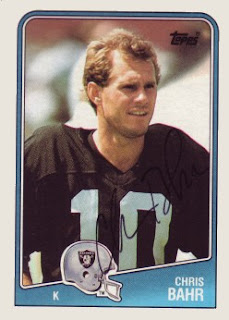 Chris Bahr was a placekicker in the National Football League and played midfielder in the North American Soccer League.

Bahr was a first round draft pick of the Philadelphia Atoms in the 1975 North American Soccer League draft. As a rookie midfielder, he made an immediate impression, tying an NASL scoring record for goals by a native-born American by netting 11, including two 2-goal games and four game winners. Bahr also netted the first sudden death goal in Atoms history against the New York Cosmos in front of 20,124 at Veterans Stadium. He was named the 1975 NASL Rookie of the Year. Bahr played 22 games for the Atoms, scoring 11 goals before departing for the NFL.

Bahr also was a member of the 1976 U.S. National Team. He scored both goals for the United States in their 2-0 shutout of Bermuda in the qualifying rounds for the XXI Olympic Games in Montreal, Canada.

Bahr attended Penn State, where he was named an All-American three times for soccer and once for football.

Posted by RRobinson at 3:20 PM