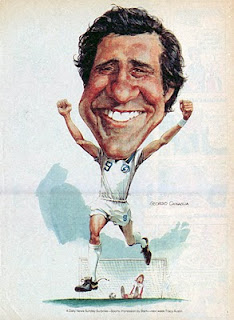 Giorgio Chinaglia - NY Cosmos by Bruce Stark of the NY Daily News....Chinaglia came to the NY Cosmos in 1976 after having played for Swansea in England and Massese, Internapoli and SS lazio in Italy. Playing along side soccer greats Pele and Franz Beckenbauer, Chinaglia would win 4 NASL titles and score 243 goals, from 1976-1983.
Chinaglia also played for the Italian National team competing in the 1974 World Cup
Bruce Stark was a staff artist with the NY Daily News from 1960-1982 specializing in sports cartoons and caricatures. Stark won the National Cartoonist's Rueben Award for "Best Sports Cartoonist of the Year" in 1966 and 1975, and "Best Special Features Cartoonist" 1968.
Star had provided drawings of members of the NY Yankees and NY Mets which ran in the color comics pages during the late 1970s. The following year Stark and the Daily News again provided caricatures of sports celebrities: Giorgio Chinaglia - NY Cosmos, Ron Guidry - NY Yankees, Lee Mazzilli - NY Mets, Harry Carson - NY Giants, richard Todd - NY Mets, and Tennis player Tracy Austin. The pages are 9 x 12" printed on news stock.
Posted by RRobinson at 4:33 PM