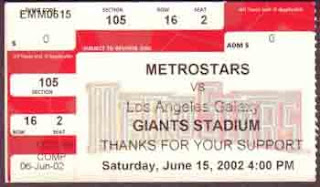 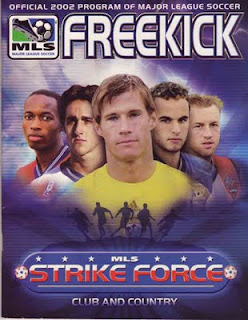 2002.06.15 Metrostars v LA Galaxy...Freekick game program featuring the MLS Strike Force - Demarcus Beasley, Josh Wolff, Brian McBride, Landon Donovan, Clint Mathis...5 American strikers with the same mission: to showcase the attacking abilities and flair of US soccer players.
Metrostars 5 - Galaxy 0
Mamadou Diallo left his mark on the Galaxy scoring 4 of the Metrostars 5 goals. Diallo struck in the 27th minute on an assist from Andy Williams and Brad Davis. Diallo scored again in the 36th minute unassisted. In the 58th minute Diallo scored his 3rd goal assisted by Ross Paule and Andy Williams. Brad Davis found the net in the 60th minute assisted by Tab Ramos and Andy Williams. In stoppage time Daillo took a penalty kick for his 4th goal of the game.
Tim Howard posted his first shutout of the season and his career 9th shutout.
Posted by RRobinson at 6:00 PM