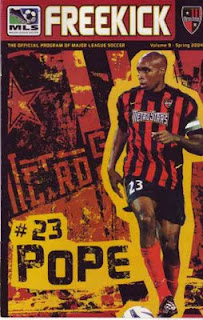 The MetroStars faced the LA Galaxy in a physical match that produced 3 yellow cards and 1 red. Amado Guevara scored first for the Metros on a penalty kick, his 5th in 5 attempts this season.

Eddie Gaven would increase the score on a brilliant sidefooted shot after he slipped past the defense to pick up a through ball from Mike Magee. 3 minutes later John Wolyniec would hit a volley in misair on a pass from Cornell Glenn.

The Metros maintained their hold on first place with the 3-0 victory...