2008.06.21 - Giants Stadium - NY Red Bull v FC Dallas
A 16th minute goal by defender Kevin Goldthwaite was all the Red Bulls needed to register a 1-0 victory against FC Dallas, ruining Schellas Hyndman's debut as FC Dallas' head coach.
Sinisa Ubiparipovic, who had an active first half, blasted the ball wide of the far post in the 44th minute from the left of the 18-yard box, capping one of the better first halves the Red Bulls have played.
Jon Conway did not see much action, but made a game winning stop in the 68th minute, diving to rob Andre Rocha, who got behind the New York defense to unleash a shot from 16-yards out. 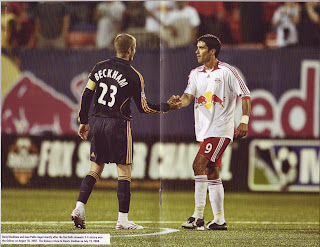 Centerfold: Juan Pablo Angel and David Beckham after the Red Bull 5-4 victory over the Galaxy on August 18, 2007 at Giants Stadium...
Posted by RRobinson at 8:00 PM