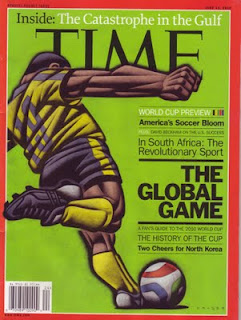 2010.06.14 - cover illustration by Douglas Fraser
The magazine featured articles on the World Cup Preview, America's Soccer Bloom, David Beckham on US Soccer success, and the History of the Game...

Article - One on One with David Beckham
What is the state of the American Game - It's the best it's been for a while.
US Plays England in the first group match - If we were up against the US 10 years ago people would say it's going to be easy. Now times have changed, there is no easy game. US has got talent...Expectations on our team is huge...

Article - Yes Soccer is Americas Game by Bill Soporito
Please stop lecturing us. We know it's called football everywhere else and it's the global game, the beautiful game. Americans call it soccer because there's a perfectly great sport here already called football, one that is not inclined to surrender its moniker anytie soon. So don't get your football knickers in a twist about it. 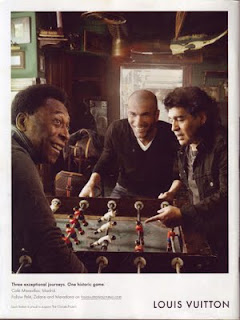 Back cover - Louis Vuitton advertisement featuring Pele, Zinedine Zidane and Diego Maradonna...wouldn't you love to have been at this photo shoot!
Posted by RRobinson at 8:00 PM