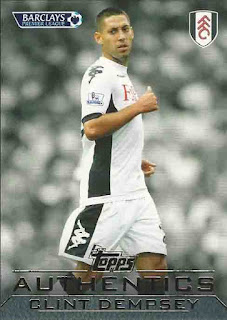 Barclays Premier League and Topps Authentics teamed up during the 2011-2012 season to produce a 50 card set, which was given away in a series of 10 numbered packs. Barclays Ticket Office provided the chance for fans to win a pair of tickets to a Barclays premier League match or a pack of Barclays Topps Authentics trading cards. Fans could enter the Barclays website and generate a code to enter or request a receipt from any Barclays ATM and text the code located on the back. Fans could enter and win every 90 minutes. The contest is now officially ended.

Topps has produced a quality set of cards, which features one American play, Clint Dempsey. Dempsey played for the New England Revolution in the MLS from 2004-2007, moving to Fulham in 2007 where he has become a mainstay. Dempsey is also a member of the US National Team, playing in the 2003 FIFA World Youth Championship, 2006 World Cup, 2010 World Cup.

The only disappointment to the set, is the exclusion of Tim Howard.
Posted by RRobinson at 5:56 AM