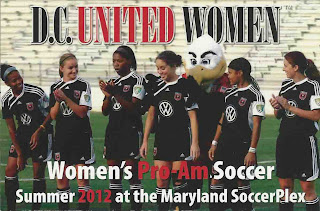 The W-League started play in 1995 providing a professional outlet for top female athletes. In 2000 the Women's United Soccer Association (WUSA) formed, playing it's first season in 2001 and it's final in 2003. In 2007 the Women's Professional Soccer league was formed to again provide an outlet for top female athletes, but only lasted until the 2012 season. Through all this turmoil of trying to keep a top professional women's league intact, the W-league continues to provide an outlet for professional and college athletes, who wish to maintain their amateur status. This past weekend while my son was at the Potomac Memorial Day Tournament at the Maryland Soccerplex. The facility was promoting the DC United Women, with the above postcard, as members of the W-League, who play their games at the Maryland Soccerplex stadium.

Quote of the weekend: Player kicks ball out of bounds and yells "My bad". His father responds "We know you don't have to tell us!"
Posted by RRobinson at 12:00 AM