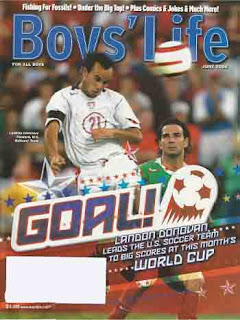 Boys' Life is a monthly magazine distributed by the Boy Scouts of America, targeted to their membership. Boys' Life first appeared January 1, 1911...

The June 2006 issue featured Landon Donovan "Wonder Boy"on the cover. The 4-page article featured information about Donovan as the leader of Team USA on their quest for the World Cup.

There is also information on "Teams to Beat" - Germany, Brazil, Argentina, England and Italy.. "Brazil which has a world-record five World cup crowns, appears to be Germany's most significant threat."
They were a little off as Italy beat France in the finals.

for the US team keeper Kasey Keller was the American to keep the Czech republic, Italy and Ghana from getting past the Americans in the first round.

Reality Check: the US did not get past the first round losing 2 games and drawing 1. Italy and Ghana would advance to the second round.
Posted by RRobinson at 8:00 PM