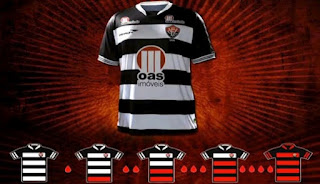 Esporte Clube Vitoria is a Brazilian football team playing in the Campeonato Brasileiro Serie B. Founded in 1899, the team has been known as the Rubro-negro (Red and Black). The team jersey has  consisted of vertical or horizontal red and black stripes, since the team changed from white and black to the current red and black in 1901.

As seen on Uni-Watch July 7 - Vitoria is again wearing a white and black striped jersey. The white stripes will be changed to red as the team's fans donate blood. The more blood donations received, the faster the white stripes get converted back to red. An excellent promotional program involving the fan base with the team while working for a great cause!
Posted by RRobinson at 7:12 PM