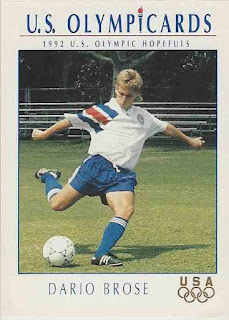 1992 Impel (Skybox) released a 110 card set for the 1992 Summer Olympics, Barcelona, Spain.
The cards were arranged alphabetically by sport (archery to wrestling), with the most popular cards of the set being the Basketball Dream Team and Lance Armstrong.  Members of the US Olympic Soccer represented in the set included:
Dario Brose - US National Team 1994-1997, Stade Briochin (France), FC Saarbrucken (Germany), SJ Clash/Earthquakes (MLS)

Rhett Harty - US National Team (qualified for the Olympics, did not play due to injury), SJ Grizzlies (CISL), MetroStars (MLS) 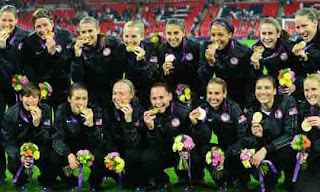 As the Olympics close on this day, Congratulations to the US Women's National Team for winning the Gold Medal over Japan 2-0 on 2 goals by Carli Lloyd, following a tough match against an excellent Canadian team which earned the Bronze Medal... 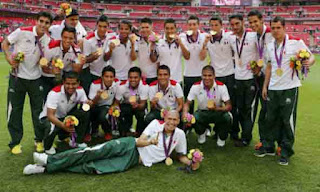 Congratulations to Mexico for winning the Gold Medal in the Men's Tournament defeating a favored Brazilian squad 2-1.

Posted by RRobinson at 9:53 AM