1996.04.20 Giants Stadium - Metrostars Inaugural Game...v NE Revolution.
Originally called the Empire Soccer Club, the team would switch to the MetroStars, which signed Tab Ramos, the first player to be signed to an MLS contract. Tony Meola and Italian player Roberto Donadoni from AC Milan would be added.
After losing their first game at Los Angeles 2-1, the Metrostars opening in Giants Stadium before a crowd of 46,826. the Metrostars' Nicola Caricola would score an own goal to give the NE Revolution the 1-0 victory with 13 seconds remaining in the game... 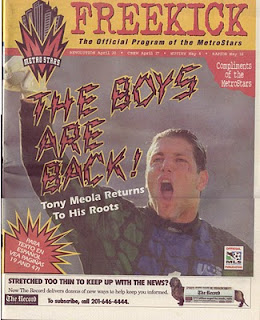 The MetroStars issued a free newspaper/program called Freekick that was distributed to all fans. Freekick featured Tony Meola on the cover, a Welcome to Major League Soccer from commissioner Douglas G. Logan and articles about the MLS, International Stars coming to the MLS, Individual team previews, Kellogg's association with the MLS, Tony Meola: Home At last, and Soccer Town, USA (Kearny, NJ)
In the Article: American Stars Coming Home by Brian Trusdell, Eric Wynalda is quoted "Two or three years from now, I think we should take our champion and play the best in Europe and I guarantee, we'll beat them."
Posted by RRobinson at 5:46 PM