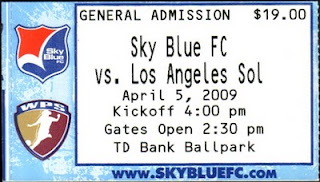 April 5, 2009 Inaugural game Sky Blue Fc v LA Sol, TD Bank Ballpark, Somerset, NJ...In it's first two home games of the inaugural season of the Women's Professional Soccer League, Sky Blue FC played their home games at TD Bank Ballpark, home of the Somerset Patriots baseball team.
After the WUSA folded, a reorganization committee was formed to help found a new and stronger league...the Women's Professional Soccer league was formed with teams in New Jersey, Los Angeles, Washington, Boston, Chicago, Dallas and St. Louis.
In 2008 the WPS was announced and the league logo introduced, featuring the silhouette of Mia Hamm (in a much copied look from Major League Baseball).
Sky Blue would lose their first game to the Sol 2-0, as the Brazilian sensation Marta connected for both goals. It was strange to watch a soccer game in a baseball park, the dimensions of the field made the seating difficult. The atmosphere of the crowd however made the game enjoyable. At the end of the game, fans rushed to the railings to meet the players, many of whom were very accommodating in greeting their fans...
More than 6,000 fans were in the sell out crowd, Gov Jon Corzine welcomed the team and Julie Foudy and her daughter provided the ceremonial first kick. 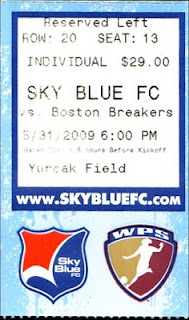 May 31, 2009 first home game at Yurcak Field, Rutgers University, New Brunswick, NJ
Making Yurcak Field their home pitch, facing the Boston Breakers...After playing their first two home games at a baseball field, Sky blue moved to Yurcak Field. In their first game Sky Blue would defeat the Boston Breakers 2-1 before 3,493 fans. Goals for Sky Blue came from Natasha Kai and Kacey White.
Sky Blue would finish in 4th place and earn a place in the playoffs, which they would go on to win becoming the first champions of the WPS.
Posted by RRobinson at 8:36 PM