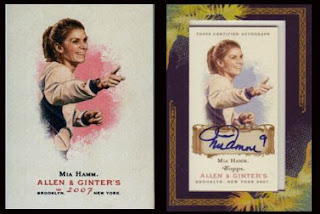 2007 Topps introduced the Allen & Ginter set of baseball cards which featured stars from "on and off the baseball field". The card design mimics the Allen & Ginter cards produced in the 1800s, which also featured many non-baseball cards. The framed autograph cards were produced on cards that were the original small sized Allen & Ginter cards framed to the standard 2.5 x 3.5 card size.
A few of the cards in this set featured soccer players, most notably Mia Hamm, in both the base card and framed autograph. The back of the base card reads:
Soccer Champion (card #272) - Mia has been the face of the explosive growth of American girls' and women's soccer over the pat two decades and one of the most recognizable stars in sports.
The talented striker led North Carolina to four NCAA titles, became in 1991 the youngest player (19) to win a FIFA Women's World cup crown, led the US to gold in the 2004 Summer Games and broke the international career record for goals. 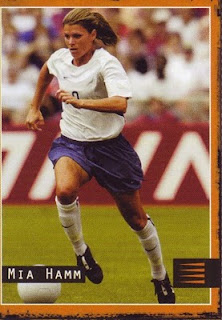 Mia - Kellogg's and Tony the Tiger Earn Your Stripes promo card featured as part of an advertisement in Sports Illustrated Kids, along with Tony Hawk...
Posted by RRobinson at 1:00 PM