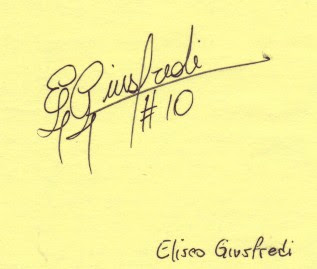 Eliseo Giusfredi is a product of the River Plate Youth Academy, Argentina and for member of the Seton Hall soccer team 2005-2007...2008 he signed with Sportakademklub, Russian First Division, making his pro debut against Volga Tver scoring a goal in the draw...

When I met Eliseo he was still at Seton Hall and told me a tale of a game against Princeton University, where after Princeton scored to tie the game, he was waiting to put the ball into play. he told his team mate that he once scored from mid-field because the goalie did not expect a shot from this distance. His team-mate told him to take the shot, which he did scoring from 60 yards out for the game winner..

This junior Argentinean forward, who can easily be spotted juggling a soccer ball around the Green, is a campus celebrity rivaled only by the basketball team. Jovial by nature, Giusfredi has been making opposing defenses queasy, with 20 goals in two years. After missing the NCAA tournament for the first time in five years, the striker will be relied on heavily to help Seton Hall get back to national prominence. This may be Giusfredi's last season as a Pirate before he hits the pros. Taking Seton Hall back to the NCAA tournament would be a good way to sign off.
-- Brett Hertel SI.com 2007
Posted by RRobinson at 8:28 AM